Tinge Krishnan’s Been So Long: Review 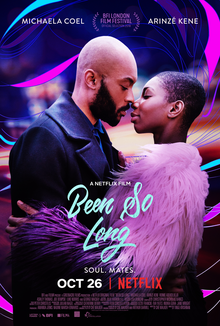 Oh, oh so you were expecting a serious thriller…perhaps a drama? Or did you think it would be just another comedy? Okay, a docu-drama where some real-life story is played out by actors? Nope.

Been So Long (2018) directed by Tinge Krishnan is a musical and judging from a lot of online commentary, it’s not something we’re used to seeing black actors lead – at least not in Britain.

Been So Long is a romantic comedy a delicious piece of frothy, fluffy, frivolity. A production showing a place where British black women rarely get space to rest in UK media. Mostly in British media if black women aren’t singing as a way out of their woes, they’re depicted in acts which demonstrate their devotion to the ‘black community’. On screen, if a black woman is not worshipping an errant son caught up in ‘the streets’ who’s really a ‘good boy’, she’s a ball-busting, miss-fix-it who’s Olivia Pope ready to cure unpleasantries.

Set in an ‘urban’ London, Been So Long is a familiar enough story. Girl-meets-boy and boy-meets-girl where romantic sparks fly from the get-go. The boy is seeking a change of life, whilst the girl is well, seeking the same though she doesn’t let on to her best friend ‘Yvonne’ and her mother. Her mother by the way is making up for both of them in the change of life desires as she thinks about re-entering the dating scene. Oh and there’s some singing, dancing and comedy thrown in.

The leading man is matinee-idol prescriptive enough and comes in a fine pecks, abs and biceps-riddled Arinzè Kene as ‘Raymond’ (totally wasted on Eastenders/2011 and Casualty/2010 tv soaps back in the day). Kene’s career is in flow right now with his much acclaimed stage play Misty and other productions in various stages of completion.

Our female romantic lead features Michaela Coel as ‘Simone’. The camera too is in love with Coel as it lingers on her face each time she’s on screen.

This is not a perfect film but it is a romantic comedy where a dark-skinned black woman paired with a black man, is the centre of attention for everyone. Even when ‘Simone’ is not in the screen’s frame she is ever present as a kind of omnipresent entity, constantly seeping through the story’s pores – and we the audience can’t wait for her return.

The supporting cast don’t disappoint either as exampled in Ronke Adekoluejo’s ‘Yvonne’. As ‘Simone’s’ best friend, ‘Yvonne’ is so much a fully fledged, romcom side-kick you could watch a whole film all about her. This realistic relationship is understandable when we learn that Ronke has worked with Michaela on Chewing Gum and Black Earth Rising.

The last time black British actors had such romantic fun as leads in a British feature film would have been…Kolton Lee’s 2005 Cherps (sighs).

Could Been So Long be some kind of experiment? Something to test the waters about the viability of UK black actors as leads in British mainstream film (as if another were needed)? If you’ve become jaded waiting for such a magical era, feast on this fantasy in the meantime.

Been So Long Trailer

Been So Long is currently programmed on Netflix.