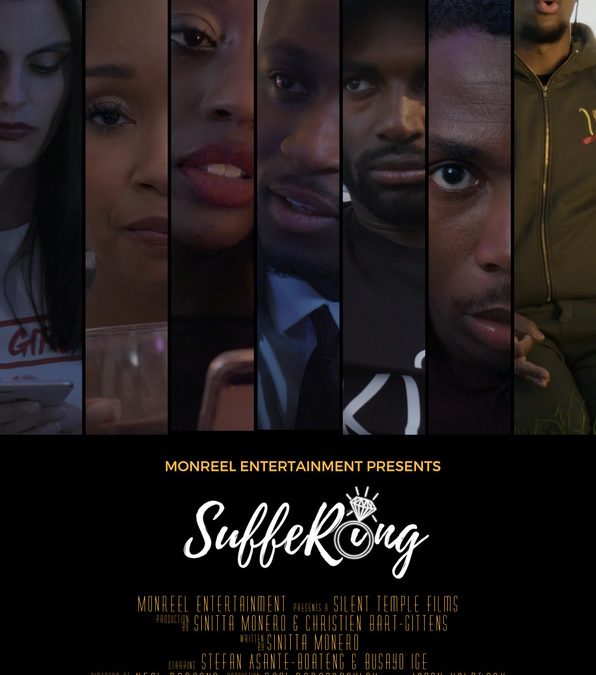 Venus vs Mars, Dear Jesus, Brothers With No Game, Undiagnosed, Meet The Adebanjos are just a few British webseries which have found their own levels of success over the last few years. It’s a tough genre to maintain without ongoing funding through subscriptions, advertising or some other financial stream that keeps the production running.  Whilst the 2015, PurpleGeko producedVenus vs Mars was picked up by Sky Living, we didn’t see much from the production since. The series investigating relationships and Christianity, Dear Jesus came to an end when it’s creator Danielle Dash couldn’t self-finance any longer. Brothers With No Game is probably one of the few older of the genre which is still ongoing…just.  It goes without saying then that the resources required to maintain the momentum of a webseries cannot be underestimated.

With this in mind, we’re always admiring of people who, knowing the odds, still want to make their own mark in this field and Sinitta Monero is one such person.

Sinitta has a strong background in the industry and has directed and produced short films Home Sweet Home and Charlie and Me after working in film and TV production for over a decade. She’s been in roles behind the camera to include being a runner and a 1stAD and many other roles in between. She developed her writing and as a result was shortlisted in competitions such as Samsung Launching People and Film London via the Eastern Edge Film Fund for her screenplay Happily Ever After. Sinitta wrote a screenplay called Sara White and the Seven Socialites that went on to win accolades via the British Urban Film Festival, to follow with a screen play for Bosh which won similar praise in 2018.

Women Of The Lens (WOTL) spoke with Sinitta (SM) to get some insights about her entering this tricky terrain.

SM: “I really wanted to explore a different perspective of relationships, which isn’t really addressed in any of the content I’ve watched so far which is (about being) engaged. (The webseries) Suffering is a step forward from casual dating, ‘situationships’ and figuring out love. What we have here is a fresh perspective of black love with relatable content, comedic performances and sexy visuals.”

WOTL: After having met her producer/partner Christien Bart-Gittens, they decided to create stories that were a more ‘positive’ reflection of black people.

SM: “When this idea came into fruition it was really important to myself and Christien (Co-Creator & Co-Producer) that we had a webseries that showcased BAME people in a positive light. Not only in front of the camera but behind the camera and ensuring we had team members that could fulfil the vision we were trying to achieve.”

WOTL: Sinitta recognises the challenges in making a webseries and explained some of the ones she encountered.

SM: “The biggest challenge of the series was the five-day shoot, one-episode-per-day method. We shot the series last May across one week. We were working ten-hour shoot days and had to ensure we kept to time and that all cast and crew were well looked after. The location we chose was quite small, so having 10-13 crew members in a small space at one time had its challenges….”

Sinitta continued; “On reflection the production was the easy part, as we came into a lot of problems in post-production and had to make sure that all five episodes had an editing style that made them all link together, but also stand alone.”

WOTL: Well, what is this self-financed webseries Suffering about? It’s a comedic, unapologetic approach to being engaged, having a fiancé and exploring the differences between the way men and women think and feel. Sinitta says that she decided to make the series a comedy as she wanted to explore relationships in a “light-hearted, funny way.” Suffering is a comedy following a newly engaged couple called Aaron and Layla who’re oblivious to the complications of being engaged-to-be-married and embark on a journey of…suffering. Being a big fan of Michaela Coel and Issa Rae one can see where some of Sinitta’s inspiration comes from. The series cast includes Daniel Nero, Busayo Ige, Stefan Asante Boateng and Michael Addo.

WOTL: Sinitta has significant experience in short filmmaking, why not take this project there instead of a difficult to sustain webseries?

SM: “Having made three short films already, I really wanted to stretch and challenge myself.

Having consumed a lot of Blackish and Insecure, I really wanted to create a UK equivalent that paid homage to BAME talent in the UK. When I was younger TV networks like Trouble were spaces I could go to watch shows like Girlfriends, Fresh Prince of Bel Air, Moesha and My Wife and Kids. With the growth of digital technology and the ever popular webseries format, it made sense to me to challenge myself as a writer to create episodic content, which is something I hadn’t done before.”

WOTL: One of the common themes found in delivering Women Of The Lens Festival, is that independent filmmakers fail to monopolise on social media and the other promotional elements of filmmaking which help to sustain their productions. It’s a much-needed element of the filmmaking process that independents, without the mega-bucks financing for public relations and marketing of mainstream films, needs.

SM: “We often forget the element of social media, this really applies to the webseries market. For us it was really important that we were able to reach a massive community of creatives behind and in front of the camera to assist in the circulation of the series.  Through our social media platforms we have been able to reach out to audiences who have shared the series and given fantastic community feedback.  Our viewers and subscribers continue to grow on a daily basis and that is a fantastic feeling.”

WOTL: Sinitta explains further about how social media intervened in other productive ways when casting for Suffering.

SM: “Social media platforms played a big part in our casting process. Having used popular websites such as Mandy.com and Spotlight, it was becoming increasingly difficult to find actors from the BAME community. Having reached out to independent platforms such as Your Cinema, Project Noir and Twitter, we were able to reach an array of undiscovered and successful talent from the BAME community who really wanted to work with us and loved the writing.”

Sinitta continues: “I really think it’s important that we’re aware of our digital footprint…Twitter, Facebook, Instagram. You have a responsibility to ensure you are projecting the best version of yourself or your brand online. Don’t give trolls a reason to end your career before it begins.”

WOTL: Sinitta offers some extensive tips about working in the industry.

SM: “Networking is imperative in this industry and will really assist you in moving up the ranks. Meeting new people from producers and distributors can all lead to securing the finances you need for your next project.”

“It’s really important that you respect the time of others and ensure you’re on time for meetings. You start projects on time and finish on time as this could affect future opportunities.”

“Never give up. At times this industry can be extremely challenging and will make you question yourself and your artistry. It’s always important to listen to your gut and follow your dreams.”

WOTL: So, what’s next for the team?

SM: “We have just completed our first short film together called The Morning After Etiquette, which is on the festival circuit. We’ve just wrapped on our five-part web series Suffering which is available on YouTube.  Presently I am working on a TV pilot on a Channel 4 Screenwriting course.”

Suffering airs each Sunday from 7pm watch the trailer:

Read more about webseries in the UK:

Dear Jesus & The End of A Chapter

Venus Vs Mars on This Day Live

How Meet The Adebanjos Was Successfully Sold Across Africa