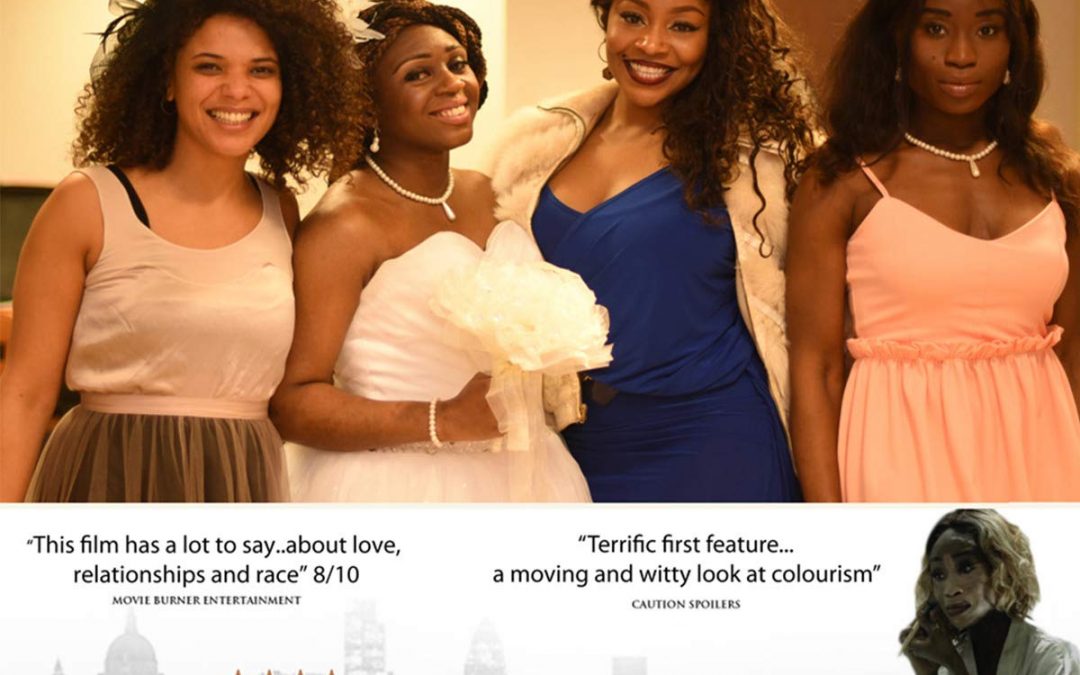 Colourism is making quite the headlines of late. Amandla Stenberg is quoted as saying that she didn’t cast for a role in the landmark film that is Marvel/Disney’s Black Panther because she thought that roles were better suited for dark-skinned actors. Beyoncé’s father Mathew Knowles, claims his whole life has been ingrained with colourism, so much so that he’d only date light-skinned black women. Knowles went as far as saying that the reason he started dating Beyoncé’s mother was because he thought Tina was white. Then there’s the viral video doing a re-run on the Internet from Youtuber VanBanter, where his vox-pop asks; ‘Are Black British Youth Obsessed With light Skin/Curly Hair?’ The results are a telling ‘yes’, bringing to the fore British tainted colourism – and make no mistake, The West is not the only part of the world this ism can be found.

It’s pernicious effect in film is not always overt – we’re not beaten obviously about the head with the mallet that says society prefers its people of colour no darker than a brown paper bag; that’d be so uncouth. It’s subtle, enchanting and seductive.

No Shade enters the terrain of colourism on a crest of the public discussion. Not yet released, it’s a British made film from Clare Anyiam-Osigwe who makes her debut directorially. It’s a story about relationships and how the spectre of colourism taints intimacy, friendships and love.

“I made this film because it was something that was constantly coming to my attention; from friends, clients, colleagues and in the media. It was like the brown elephant in the room that everyone can see and feel out of their peripheral vision, but didn’t want to acknowledge.”

Clare Anyiam-Osigwe is no stranger to the media and film. In a partnership with her sister, she founded JoClare PR and Anyiam-Osigwe is married to British Urban Film Festival founder Emmanuel Anyiam-Osigwe. Her entry into filmmaking seems inevitable and the subject matter of her film as a first? Well, maybe. Clare’s also the founder of the Premae Skin Care company. There’s not doubt she’d have seen some of the damage aimed at skin, which isn’t deemed the ‘right’ colour. Some of the reasons around how Clare’s gauntlet falls on colourism and misogynoir could seem at first glance obvious, but she continues in her own words on reasons for her own contribution in film.

“I felt is was my duty to tell this story. My point of view is not that of the ‘angry black woman’. I am happy in my life and career. I really didn’t need to tell this story for my own self; it was more of a love letter to black women, a tool to have a dialogue with black men and all people of colour. It’s a chance for healing; a moment of clarity and a chance to educate and change the discourse of ‘blackness’ in the U.K.”

It’s funny how black women are quick to point out that they’re not the ‘angry black woman’ stereotype as a disclaimer prior to speaking truth. Whilst it might not be Clare’s precursor, it could hint at some of the ways in which black women and men have internalised colourism and misogynoir – a measure of how it’s affected their behaviour and the way they speak of it. Clare offers her own opinions on how people manage colourism.

“I don’t think it has been internalised. I see men and women talking about it in barbershops, hair salons and on twitter. Most people try to ignore it, but once it’s brought up, you can’t stop people from discussing it. It has an effect on people, mostly a negative effect, largely unwanted and rejected by most black men and women. There is a small percentage of people who agree with colourism and the mistreatment of black women. Some of it is learned behaviour, preference and a genuine dislike of their own blackness, projected onto others.“

‘Black film’ is often mired in ‘issues’ and ‘isms’ both in what we see on screen, but also through the reception of its audiences and how they subsequently view and discuss it. It bears such a mantle of responsibility and part of that is because we get to see so little of it on mainstream platforms. If it’s not a film, which deals with historic racism, then it’s about drugs or gang-crime, if not that, then it has some political statement to make. Even Disney princesses of colour must save her community long before she thinks of her own personal desires. ‘Black film’ just can’t…be. It’s hard not to see how No Shade doesn’t step into this territory, but Clare counters;

“I think that all films are issue-led in one way or another. Themes of greed, love, abandonment, colourism, they explore the human condition and that’s why we watch films; to escape, to think, to cry and to laugh. The film No Shade is issue-based, but it’s very entertaining and will make you laugh out loud, toes curl at the love scenes and kiss-your-teeth at the mean moments. That’s what films should do.

We have to discuss the imagery of the women in Black Panther. It’s hard not to read or have a conversation, which doesn’t cross reference the film that is breaking records on many film industry fronts. The film is a gift, which keeps on giving. The deeply melanated women consistently taking centre stage in a mainstream blockbuster was arresting particularly in today’s climate of certain types of leading ladies. This is perhaps Ryan Coogler’s greatest triumph in Black Panther, overtly and covertly placing black women slap-bang in the middle of a tent-pole film. He wrote black women in ways that one is hard-pushed to think of as happening before in any film of this stature. Clare gets emotional as she recounts her first viewing.

“I tear-ed up within five minutes of watching the film. I felt a glow and draw towards the screen for every clip, every frame of the film. Lupita, Leticia, Florence, Danai, Angela, Chadwick, Michael – everyone! I saw each of their characteristics in me. I saw an image of Africa that I had secretly dreamed of my entire life. I saw a utopia that was brilliant and wholesomely black and African and inviting and self-sustaining. This gave me immense joy. Although this was a fantasy, a film for pure entertainment, I took away a piece of that film and have locked in my brain forever. I feel like the mission that ‘Nakia’ was on in Black Panther, is what I’m on; writing, directing, acting with No Shade – let’s sort out the problems in our community and then I’ll fade into the shadows and move onto the next mission.”

Even with the background support via her filmmaking contacts, the production wasn’t completely without its own challenges. All film productions face problems and moments of ‘wow, we didn’t see that coming’. What makes it look seamless often comes down to two main things a) the amount of money available to suck-up problems and b) the temerity of the crew. Clare lets us in on one of her own production’s challenges.

“Managing your cast and crew when a location falls through. This happened from moment number one, on shoot-day one. The mansion we were supposed to shoot in was double locked and the owner was in Venezuela! This set us back by five hours. I carried on shooting the second scene and my husband and me were phoning frantically to find a replacement venue. Setbacks like this teach us how to toughen up and overcome the next challenge.”

Clare often speaks with a passion about ‘artivism’ when discussing her filmmaking, what does this mean to her?

(It’s about) “Using the format of film to provoke a dialogue, incite change or simply educate people on a topic that they are not privy to. My agent is a white woman. When she read the script, she had no idea what colourism and misogynoir was, even though she has a black partner. Now, she does and her life is richer for it.”

The ‘Time’s Up’ rally cry was loud in 2018’s Oscars (well, at least in some of the badges some chose to wear) and it’s fall-out in terms of changes needed in the industry, culminated at the big-frock event, in the actress Frances McDormand making a game-changing speech. As McDormand accepted her winning ‘Best Actress’ gold statue, she used the term ‘Inclusion Riders’. The term might be new to you, but the concept, maybe not. ‘Inclusion Riders’ can be included in actors’ contracts, which allow them to ask productions about their active engagement in achieving diverse crews and cast. It already bears a lot of the ethos of Women Of The Lens. We’ve always asked ‘how is a production crewed-up; where are the black women/of colour in your production? How is a production working towards a productive change in equality?’ Actor Michael B. Jordan (Black Panther’s ‘Erik Killmonger’) is the latest actor who said that he’d adopt the clause in his future projects. Still, Clare is a woman entering a male-dominated industry. What role does she think that men (for those that want to) should play in bringing equality of opportunity for all in our beloved industry?

“I think men should openly label themselves as Feminists. They should speak louder and longer about the misrepresentation of women and after they speak, they should actively do things to make sure women in their workplaces and on their sets are paid the same and receive the same level of support to make films, write scripts, get things wrong, make mistakes and still be trusted to have another go. Men can make mistakes all the time, fail and recover. Women are expected to be perfect and we’re not. We need the support to dust ourselves off and try again when things go pear shaped.”

What steps does she think the industry needs to take in order to monopolise on the #MeToo fall-out?

“The industry needs to offer Human Resource departments to each film or studio company. They need safe spaces for counselling, off-loading of emotions and acknowledgement of reported malpractice. If it helps more women feel safer at work, I’m all for it.”

No Shade is released through a new platform from BUFF Originals. It’s due to premier on June 5th at the Rio Cinema.

Watch the No Shade trailer from here.