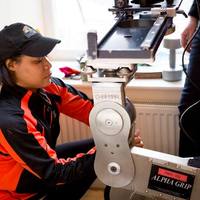 An area we think is important to highlight at Women Of The Lens is the numerous careers that can be found behind the camera. One such role we were given insight into is that of Key Grip.

In-between her busy schedule, we were pleased to interview Grace Donaldson who is the Key Grip for newly released film Pin Cushion(2017). Grace is originally from Canada and as a Level One Qualified Key Grip, she has 25-years-plus experience. It’s been an exciting path where she’s been able to work with industry icons such as Ian Buckley. Grace’s steady hands can also been seen in features such as A Fantastic Fear of Everything(2012) and Byzantium(2012).

Starring Joanna Scanlan (as ‘Lyn’) and Lily Newmark (as ‘Iona’), Pin Cushion is a British independent film (funded by the BFI) from the director Deborah Haywood. It tells the story of a mother and daughter moving to a new town anticipating a new start in life. The film begins to weave a narrative around unresolved relationship issues and how they can compound pressures when new people enter the immediacy of such already intense bonds.

The film, its cast and crew have already been nominated in the British Independent Film Awards (2017) and the Evening Standard British Film Awards (2018) and won the Creteil International Women’s Film Festival (2017) ‘Best Feature Film’ category. Grace took a few minutes to let us in on her role in Pin Cushion.

Women Of The Lens: Grace became involved in the production via an introduction to Director of Photography Nicola Daley.

Grace Donaldson: “I am represented by Reel Angels Agency, who promote talented female technicians and they were funded by the BFI to hold networking events. This lead to an introduction to the lovely DoP Nicola Daley.”

GD: “There was a pilot scheme as there was only one film crew there and they needed more as the interest in shooting in Manitoba started to grow in the 90’s. We were invited on to a film set to see what department we wanted to be in and I chose the Grips department.”

WOTL: So, what exactly is a Key Grip responsible for on set?

GD: “A Key Grip is one who provides support for the camera, everything below the camera is our responsibility. There can be times that the camera has to be fitted to a car and we liaise with companies which specialise in Low Loaders and also action vehicles.”

WOTL: She has a number of challenges in carrying out her job and Grace gives some insight into what she sees are the main challenges.

GD: “Make sure you are covered for complex locations where you would need a rigger and standbys. Health and safety is very important, you may want that great shot but you need to understand the logistics and the lay of the land…” She added;

GD: “Though you work with someone you do not like, you need to have a stiff upper lip and a brilliant sense of humour.”

WOTL: Thankfully there are some perks!

GD: “I got a free gym membership and I get to work with some lovely people from all walks of life. It’s like a Nomads Tea Party.”

WOTL: Simone Pennant is the founder of the TV Collective, a diversity campaign organisation in the media industries. TV Collective, in collaboration with the University of Westminster last year unveiled a Powerlist of leading BAME industry professionals on which Grace is listed. The list also includes Nicola Asamoa Endemol talent manager, Maxine Watson Director of Programmes at Twenty Twenty and Journalist and Broadcaster Jasmine Dotiwala. It’s good though to have peers or others to look up to and Grace has her inspirations firmly marked.

Pin Cushion will be screened at our November 2018 event partner cinema Genesis on Tuesday 17th July. After which there will be a panel discussion to include Grace Donaldson. This screening is part of Birds’ Eye View’s, 4 Film/5-City, Reclaim The Frame Influencers project that endeavours to widen audience access to films by women.

We’re pleased to be able to offer in conjunction with Birds’ Eye View  2 pairs of complementary tickets. All you have to do is be the first to leave in the comments section ‘Reclaim the Frame’ on our Facebook post and we’ll notify the lucky recipients from there.

The UK’s Creative Skillset breaks down in their careers section some of the facets of what the role of Grip would involve.