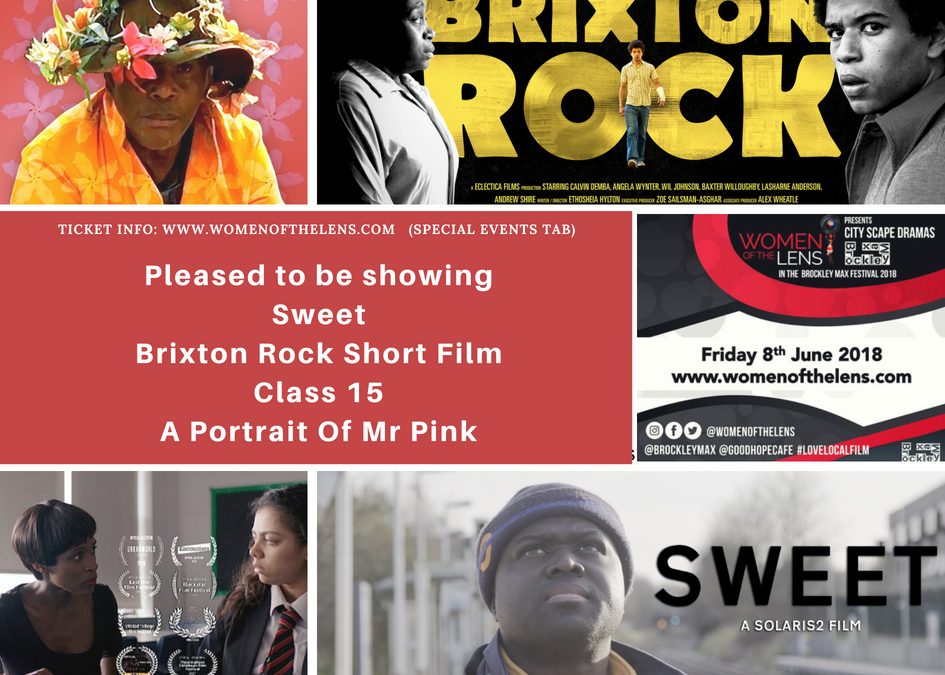 Women Of The Lens joins Brockley Max Festival to bring a collection of locally focussed films and an industry-led panel conversation. As part of south east London’s annual event, we present an evening of film shorts picturing our city. We invite you to join our conversation in a panel discussion with local industry and filmmakers who’ll share their love of their filmmaking craft. Joining us will be the Producer of SWEET, Garfield Hall; Ethosheia Hylton, Director of Brixton Rock Short Film; Dean Leon Anderson, Director of Class 15 and Sue Russo, Business, Training and Development Manger for FilmFixer an important tool in any filmmaker’s kit.

We’ll be investigating the dynamics of filmmaking, using local resources, story ideas and how to carry them through, the importance of film screenings and festivals and employment in the industry to name a few. We really look forward to seeing you!

I was born and raised in Brockley. Currently a senior Legal Clerk in a city law firm, I’ve always been interest in film. I enjoy collaborating with Leon (Leon Oldstrong the director of SWEET) on projects that have a human connection and social relevance. Leon has an extremely unique skill as a director to touch audiences emotionally. Garfield has produced on Killer Heels and on The Antwerp Dolls he was assistant producer.

A graduate of Identity Drama School and The American Academy of Arts, Ethosheia’s acting credits include Innocence Lost and Oya: Rise of the Suporisha. She’s worked with the BBC and joined their production apprectice scheme in 2015. Through Ethosheia’s Eclectica Film Production company, she has written, directed and or produced on other films to include Brixton Rock Short Film, Lia and 13 Years A Slave. Ethosheia join Women Of The Lens last year as a Guest Curator and her film featured in our 2017 programme.

Dean is a writer and director born in London. He is an alumnus of the University of Greenwich. Trained by BAFTA nominated film directory Yann Demange, Dean has premiered work at festivals to include Encounters and the London Short Film Festival. Class 15 premiered at the Oscar qualifying Encounters Film Festival in 2016 and Urbanworld Film Festival in 2016 in the USA. Dean is currently heavily involved in a film length version of Class 15.

Sue originally trained as an actress before finding her way into the music and events industry as a Studio Manager where she progressed to working for Pineapple Dance and being the Tour Manager for Oasis and Radio 1. Sue’s current role includes placing social value on FilmFixer’s services, which ensures local residents have access to training and employment that develops tangible career routes for burgeoning talent.

Some of the work centring FilmFixer is that of the font between UK landmarks and film productions seeking to find thatlocation for film scenes. It currently manages London boroughs to include Lambeth, Bromley, Haringey, Islington and Lewisham and it has worked with productions to include Mission Impossible 5 and Legend and Kingsman: The Secret Service. FilmFixer also provides training and employment for young unemployed people in the industry by partnering with their client boroughs.

This exciting screening and subsequent panel discussion takes place at The Good Hope Cafe, Ladywell, Lewisham, London SE13 on Friday 8th June 6 to 9pm. Tickets are £5 for adults and children under 15, £3.

Full details can be found from here

Additional speakers expected to attend are Anne Dummett, Film Editor and James Van Der Pool, Producer on the film production of A Portrait Of Mr Pink.