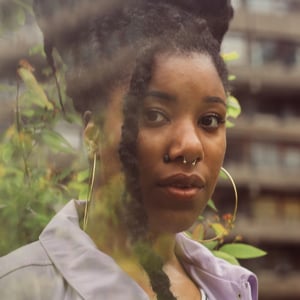 Film studies education is a fundamental piece in the map of developing talent in the film industry. It’s a way of shaping how we as audiences experience film and a means of influencing industry representation. The study of film though mirrors the current industry and is lacking in the diversity our Festival champions. Educational institutions could learn a thing or two by seeking stronger relationships with organisations who’re at the forefront of recruiting diverse cohorts onto existing courses that is reflective of the societies we live in (yeah, we see you ‘Positive Action Scheme – BAME2018’).

Beyond the glossy prospectuses and the smiley, happy images on promotional material, we wanted to hear from a real-life student about what it’s like on a Film Studies related course and one way we approached this was via an interview with Deborah Findlater.

Deborah is a student at Kingston School of Art completing a Masters in Experimental Film. Deborah also has a degree in History with Film Studies at the University of Essex. We interviewed her as a means to give us some insight into the educational side of the industry and its impact upon student life, curriculum content and future prospects for would-be filmmakers and the supporting production roles.

So, why not just ‘get a proper job’ instead of all this arty-farty-filming-faffing-around Deborah?

“In hindsight I now know my decision to pursue film is due to the fact that it is a composite of all the other things I’m interested in: music, theatre, fashion, foreign languages, art, poetry, day to day life, the conversations I hear out and about and the ones I have with friends and family. Living in London there’s always external pressure to do something that pays off more immediately, but internally it doesn’t compare to the joy of doing what you love.”

There’s a good debate in the industry about a theoretical route and a practical one. Each route has its own merits and can have equally important impacts upon how we experience film. Deborah let us know about what she’s learning and her choices for her specific route into the industry.

“I had/have no interest in going down the commercial film route, working my way up from being a runner rung-by-rung. I want to conceptualise a film, write it and have control and autonomy over it. Rather than being deeply passionate about the mechanics of film, it is for me a chosen form of expression, just like painting or sculpting. Artists’ film and video allows for that kind of greater freedom. However it’s inextricably linked to the academic so requires a deep (and expensive) commitment to study.”

Well, what things are you learning that you couldn’t have learned elsewhere Deborah?

“Being able to work with Super 8 and 16mm film has been the biggest blessing so far. Also learning about the lineage of art film and video, which is rare to have on a practice based course.”

There are a lot of things to juggle as a student, What are the main challenges that you face Deborah?

“Money and funding for film projects, living & travel; balancing work with study; receiving support to do with health both mental & physical”

As we’ve stated earlier, education is reflective of the industry and we asked Deborah why she thought that film courses are still, well… ‘so white’?

“It starts from young. On a micro level there may be familial, cultural pressure to pursue more ‘serious’ subjects. Then structurally there is class pressure to go into a field that offers a secure paycheck. Contributing to this is the lack of access to equipment and then being taught how to use it. I also think confidence and the ability to believe that your voice is worthy of being heard – this is an important factor. Conventional Hollywood cinema tells us that you have to be ‘extraordinary’ to be important.”

“My undergrad dissertation was entitled ‘We Are Trying to Tell a Story‘ taken from the Isaac Julien film ‘Territories-1984’ (also director of Young Soul Rebels- 1991 and Looking For Langston-1989). In it I explored the trajectory of Black British cinema and through it I discovered so much. I wasn’t aware of its rich history and I still think that so many people are not. There should be an intergenerational dialogue that has to take place to ensure these stories are not lost, so we know what we’re up against and not repeat the same mistakes. Feeling like you come from nowhere, with no sense of being rooted, can be dangerous.”

Describe the content of the course and how this may affect you adversely as a person of colour?

“The artists, filmmakers and thinkers that we engage with are predominantly white. It even feels extremely banal to say that. We definitely could look at way more Black filmmakers and artists’ work and engage with film histories that aren’t Western. We’re also working against the mechanisms of the art world and film industry. I have no doubt the artists that we have engaged with so far are important to an extent for our practice, however the fact that they are seen as such in the first place is to be unpicked. I’m always asking who are the gatekeepers of what is seen as ‘canon.’ ”

“We are living in a time where issues to do with race and identity are in the mainstream, many of the issues I experienced in my undergrad are not the same due to this awareness. Even then we discussed concepts like ‘white privilege,’ these things aren’t new. In my current course we’ve read texts on intersectionality, by Audre Lorde. However, these ideas are often relegated to a single seminar; they aren’t seen as tools of analysis to be applied to all facets of content.”

Does the lack of diversity (in people as well as content) on film courses limiting to Deborah’s own story in any way?

“It lends itself to there being only a few filmmakers of colour who ‘make it’, rather than there being a collective group of us to build an alternative infrastructure. I think that a lot of us internalise this and start to enjoy being the only one, it becomes a way of marketing yourself. There is enough room for there to be more than one of us making a variety of work.”

So, what does your future look like in the industry; what are you doing once you’ve finished your studies?

“I hope to continue working as an artist filmmaker, making work for galleries both films & video installation. Currently I’m in post-production for a short film I’ve written and directed as part of the ICA’s Stop Play Record scheme.”

Directors UK has a host of research statistics about the industry which you can read from here.