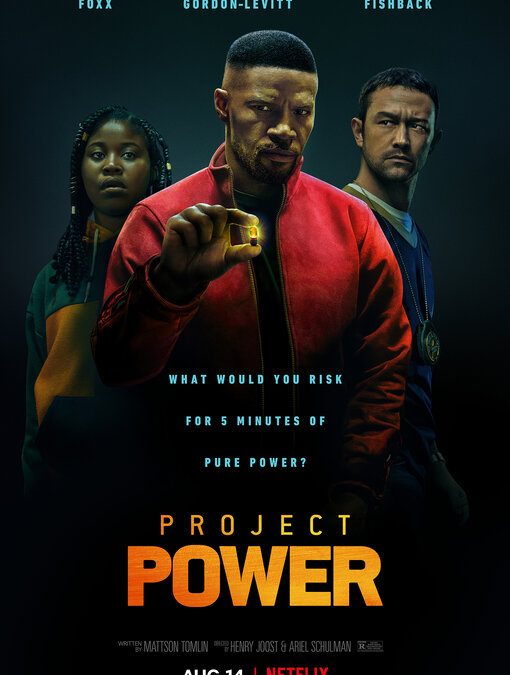 “…is it because I’m white? Are you assuming that me and this beautiful black woman wouldn’t be able to share a happy home?…” In provocative, accusatory tone, these lines are shouted by Joseph Gordon-Levitt’s ‘Frank‘ in Project Power to shadowy figures trying to aggressively interrogate ‘Irene’, a black mother within her own home. Knowingly or not, it hints at some real-life, high profile, tragic events.

Okay, so Project Power’s story goes like this; a teenaged black girl lives in a deprived, dystopia that is New Orleans. Her mother has diabetes, but has little money to pay for the medicines she needs to manage her condition. It brings a heavy mantle to the young girl as she uses nefarious actions to bring in money to support her mother. As intelligent as she is, she’s jaded by school because its curricula doesn’t stretch her abilities, but she’s a brilliant word-smith of a rapper. So far so ‘here we go again’. Even though the film is driven by drug-use a common staple of this genre, these drugs are different. These drugs and their use adds the sci-fi  genre to the narrative and makes Project Power more watchable over other films of a similar nature.

Black women are central to the narrative in Project Power, seen and unseen. A young Dominique Fishback as ‘Robin’. Andrene Ward-Hammond as the aforementioned ‘Irene’. Kyanna Simone Simpson as ‘Tracy’. Then there’s the unseen Henrietta Lacks as…Henrietta Lacks. In 1951, African American Lacks visited her pshyician only to be diagnosed with cervical cancer. Unfortunately during the course of her ‘medication’, her human cells were taken from her without her knowledge or permission. Her cells were subsequently used to form the basis of cancer treatment for women today.

Relying on the idea that everyone can buy superpowers through the use of the drug, Project Power reflects a number of the notions of the X-Men franchise. Project Power investigates the idea of human DNA, its mapping and through this knowledge the ability to change DNA – if only for a short period of time. The villains to the heroes of Project Power are corporate, where they try to weaponize DNA. It is apt then that the historical presence of Henrietta Lacks forms a background to the film.

Yes, Jamie Foxx is central in the film posters and billing. The film is using his star power to bring in audiences and and whilst our journey through the film is with protagonist ‘Art’ (played by Jamie Foxx), his narrative is driven by his need to rescue his daughter ‘Tracy’ and he is supported by ‘Robin’.

Project Power (dir. Henry Joost/Ariel Schulman, written by Mattson Tomlin) has good production values. The performances are engaging and Joseph Gordon-Levitt and Dominique Fishback look as though they’re especially having fun both in the roles they play and on set. It is their bonding that brings watchable, believable performances to these characters.

The film extrapolates our present day societal challenges of crowded inner city dwelling and the resulting lack of humane housing, designer drugs, failing education systems, poor access to healthcare and inadequate policing into a future where the human genome can be commodified as if it were an object on the stock market.

One of the film’s detractions is that it doesn’t develop this theme and relies heavily on its action sequences to carry the film along. In filmmaking folklore a hero is only as good as his villain and unfortunately the ‘bad guy’ representation is mono-dimensional.

Women Of The Lens Fim Festival is calling for entries. Details here.

Founder of Women Of The Lens Film Festival.