How Do Black Women Position Themselves In A Changing Broadcast Environment? What Is Broadcast Today? Panel Discussion Begins To Find Ways 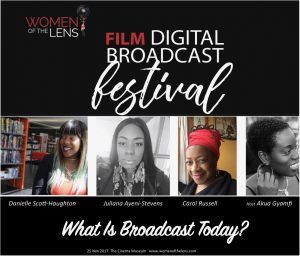 If one works in the industry, it’s often difficult to imagine a time without the Internet. As technology progresses and advertising revenues fluctuate between traditional and alternative platforms of broadcast, the blurring of what we’d understood to be broadcast has changed. Some of the latest developments include the BBC moving its Channel 3 to digital online only. In this Theme and panel discussion, we attempted to understand what is arguably a contemporary redefinition of broadcast.

Based in our primary Festival site, the historic Cinema Museum, we had an informal discussion about contemporary broadcast, how it’s changed and how black women are positioning themselves in changing the narrative.

On our panel is Danielle Scott-Haughton the creator of the webseries Dear Jesus. Juliana Ayeni-Stevens the Founder of Purple Night Colour Productions. Carol Russell the Founder of Fresh Voices UK and our host was Akua Gyamfi, Founder of The British Blacklist. 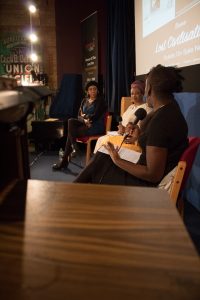 What Is Broadcast Today? Panel 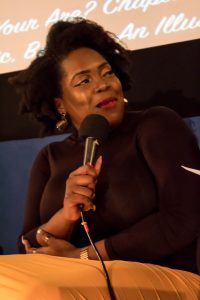 Danielle started the discussion by saying, “Things are improving in broadcast, very slow and change takes time because those that are in charge don’t want to let go because there’s a lot of money in television broadcast. So the idea of relinquishing that power for people who don’t look like you is challenging. That being said there are people who understand that there should be enough space at the table for all of us. They are slowly but surely realising that they’re running out of ideas…we can’t watch anymore Downton Abbey (ITV)…”

Carol set up Fresh Voices in 2011 when she realised “…that the last original drama series by a person of colour or a black person was Black Silk. There have been adaptations; there was the adaptation of the book Baby Father (Patrick Augustus), there was the adaptation of the book Small Island (Andrea Levy). Just the other day there was the adaptation of Boy With A Topknot (Sathnam Sanghera), but there hadn’t been, up until 2014 when Daniel (Fajemisin-Duncan) and Marlon (Smith) created Run for Channel 4, anything since 1989. I set up my company because I wanted to showcase the work of black and Asian and other ethnic minority writers to the industry because at the time what I was hearing was, ‘they didn’t know where we were,’ so I helped them find us! That’s what I do.” 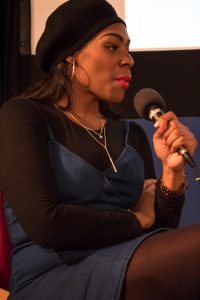 Juliana began to introduce herself, “I started my company Purple Night Colour Productions last year after the realisation that I didn’t see women that looked like me in the industry. I had the opportunity to work in talent management, I worked in theatre and I was very eager to do writing with production, but I didn’t see anybody that looked like me. I would knock on doors and it was like doors were shut in my face. So rather than knock on doors, (I thought) let me try and do things on my own…and that’s where Purple Night Colour Productions started.” 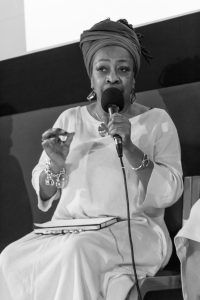 Danielle began to discuss what she saw as the challenges black British women faced when trying to forge ahead in broadcast. “When you’re a black woman in this industry and you’re trying to break through, especially as black British and a woman…Britain is a smaller market. We do not have the same level of access to opportunity as your Issa Rae’s, or your Black And Sexy TV that can go to HBO, BET…I want us to be able to compete on the same level as everybody else. Why do we always have to be the ones that are making stuff by ourselves – because we always do it, the onus always falls on us and it gets upsetting for me.” 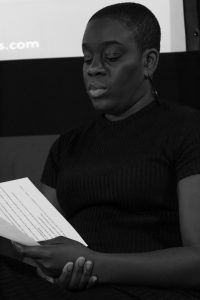 Akua interjected, “When the gatekeepers are keeping the gate shut, how do we really effect change; what is the one tactic that seems to be working from the UK perspective, cos in America they have a whole different set up?”

Danielle responded; “The consistency…its hard if you’re being consistent and you’re consistently having doors shut in your face. The way the UK industry works is it’s very nebulous, there’s not one path that I would say, ‘follow this path, you will have a pilot in two years,’ it doesn’t work like that.

A ‘suggestion’ was thrown out from the Cinema Museum’s floor based on the person’s observation at Sundance Film Festival on Muslim narratives. They’d seen that Muslim films had committees and were able to dictate how their culture was shown. The ‘suggestion’ was that for productions in broadcast, which represent people of colour, there should be a committee in a similar vein as the observation at Sundance.

Akua’s answer highlighted some of the lack of understanding that some have around the ability of British black women keenly on-point with nous, chutzpah and wealth of experience. She responded thus; “That’s a tangent, because we have groups that talk about what is representative of us, but it’s not as simple as that because we’re not even at that stage, we’re not actually getting to people that can tell our stories…”

Rest assured, we shall return to this important conversation in the near future.

You can watch the full panel discussion from here.

Black Silk was a television drama series created in 1985 (BBC) by Mustapha Matura and Rudy Narayan. It starred Rudolph Walker, Mona Hammond and Suzette Llewellyn. The story centred black lawyers and one in particular’s attempt to join politics.